Home » How to make a mechanical keyboard quieter?

How to make a mechanical keyboard quieter?

The rattling, screaming and banging mechanical keyboard can be a frustrating affair. Its more of an orchestra drum music for you. Especially if you want to work when everyone else is sleeping in the vicinity. It is also a problem if the loud noise takes away your concentration while typing.

Fortunately, after my research on this topic, I did indeed find some ways through which you can muffle/ lessen/dampen and in some cases completely wipe out the noise made by a mechanical keyboard and make it quieter.

So if you are sick and tired of how loud your mechanical keyboard is and want to fix it, read on.

Before moving on to how to make the mechanical keyboard quieter, I would like to tell you very briefly about why mechanical keyboards (or even a regular keyboard) make a clicking sound so you can better understand the solutions I will put forward.

Why the mechanical keyboard makes sounds?

To put it simply it is due to the way the keyboard and the key buttons are set up. When you look at the keys on a keyboard, it has a plastic stem inside.

So when you press the key all the way down while typing, your keycap runs into the switch box body. On top of that most mechanical keyboards have a solid metal backplate which acts as a sounding board and amplifies the noise further.

So basically you are slamming plastic into the plastic on a big metal plate and that is why the mechanical keyboard makes that loud clicks and clacks.

Additionally, the choice of the plate that you mount on the keyboard switches determines the amount of noise that your keyboard will produce. Poor build quality will result in the production of unwanted sounds as you use your keyboard.

Now let us look into the solutions

How to make the mechanical keyboard quieter

This method physically dampens the noise by using rubber or silicon dampers. Putting a soft material between the noise source and the elements that broadcast that noise.

You can get an 0-ring kit online for 10 dollars or less. The kit comes with enough 0 rings and a keycap puller to make it easier for you to add these o rings in each key of your keyboard. 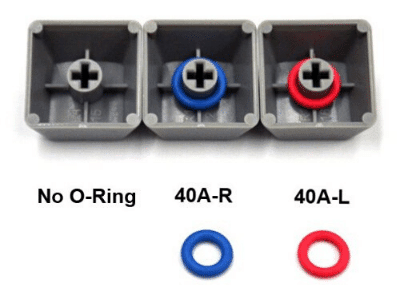 Now a standard mechanical keyboard has roughly 104 keys so one of these kits should cover any keyboard even if it has a ton of macro keys.

You can use one or two rings depending on your choice. I would recommend you to check the key noise after placing one o ring and then two o rings.

It seems a pretty labor-intensive process but it only takes about five minutes and the result is worth it. It is better to do it one by one so you remember where to place which alphabet or number.

The result is that the sound of the keys in your mechanical keyboard is much quieter. Not only quieter but more muffled. They prevent the keystrokes from having that harsh plastic on plastic sound between the inside of keycap and the stem. They also reduce the audibility of the noise by shortening the travel distance when you press the keys.

Some people who have used the O rings to make their mechanical keyboard quieter have reported a significant drop in noise level (up to six decibels).

Even if you have blue switches which are deliberately clicky, o rings help quite a bit. They are quite an effective and cheap method to quiet down your mechanical keyboard.

One thing to remember is that it won’t make your keyboard silent but it will dampen the sound and make it less harsh.

So, you don’t need those fancy silent mechanical keyboards from companies charging 200 dollars. You just need some piece of rubber available online up to 10 bucks.

Another cheaper alternative is if you live near an orthodontist or have a friend who is an orthodontist, get a pack of their braces rubber bands. It is the same exact thing and they will probably give it to you for free.

Lubing switches and stabilizers are one of the most common ways to make the switches smoother.

A small amount of lube applied to friction point inside the switch housing and stabilizers can make some switches feel quieter. Experts also recommend lubing springs to reduce the noise made when they move around inside the switch.

Make sure you’re only applying a small amount of lube, or else it may start causing a wet popping sound.

Since the sound is made because of the plastic hitting plastic, another way to make mechanical keyboards quieter could be to use a sound dampening foam. This is a lot like O-rings, where instead of using rubber rings, you place a foam above the switch.

This makes sure that when the keys plastic hit that of the switch, there is some cushion to dampen the sound.

The foam catches the clack between the keycap stem and the switch. Also, the travel distance is reduced depending on the thickness of the foam. It is, in fact, an alternative for o rings although it works with only some switches like Cherry MX or similar types.

GMK switch clip works the same way but glorified with a bracket you can click on the switch.

You can easily create these switch foam for your keyboard as shown here.

Some other methods include clipping the stabilizers.

Cherry stabilizers come with two springy legs on the bottom that are designed to soften the impact when the stabilizers bottoms out. Many people prefer a more solid feel and will clip those legs off

Placing the mechanical keyboard on a softer surface can definitely help reduce the sound a bit.

You can get a huge mouse pad or a towel or keyboard mat which is a soft surface and which will dampen the sound coming out of your mechanical keyboard. It kind of absorbs the vibrations.

Way better than when the keyboard is placed on the hard desktop-like wood or glass.

The change is very less and not very significant when compared to key dampeners but it helps a little bit.

If you are ready to shell out a bit of cash then go for the mechanical keyboard with “topre” switches.

This is because they come with a rubber cup installed in the key stem which absorbs the sounds.

No matter what you do, it’s likely that your mechanical keyboard will continue to make some noise.

So if you’re a gamer, Youtuber, or take calls and don’t want the sound to be recorded, try the methods shown above and then use some tools to further refine the audio quality. A lot of video creation tools (such as Camtasia) already have a noise removal feature, else you can use something like Audacity.

Another way could be to use tools such as Krisp to make sure these keyboard noises are filtered while you’re recording the video or taking calls.

I hope by following the above techniques you will be able to make your mechanical keyboard a lot quieter.

Try out all the methods and hopefully all or one of them will work out for you.

I would personally recommend o ring method. Translucent o rings will not interfere in case you have LED lighting in your keyboard.

Don’t forget the keyboard mat for an added absorbent effect.

ErgonomicSpot.com is a participant in the Amazon Services LLC Associates Program, an affiliate advertising program designed to provide a means for sites to earn advertising fees by advertising and linking to Amazon.com

Scroll back to top